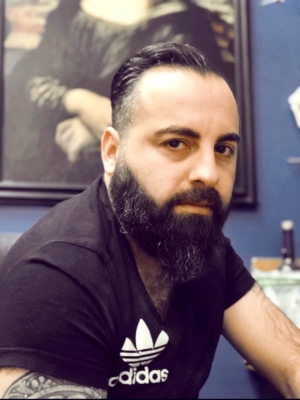 The Assyrian Cultural Foundation is proud to announce that Reni Stephan is the first place winner of its 2020 Fine Arts Competition.

If you have ever visited the Assyrian Cultural Foundation, Reni’s works would have immediately caught your attention.  All of the giant replicas of ancient Assyrian reliefs found throughout the building were created by him.  However, the fact that Mr. Stephan won our art competition for a painting that he submitted proves that his artistic talents are not limited to sculpture.

Mr. Stephan was born in Baghdad, Iraq in 1981, but came to the United States as a child in 1993.  He now resides in Detroit, Michigan.  Ever since he was young, Mr. Stephan exhibited a love and talent for art, so after he finished high school, he decided to attend the College for Creative Studies in Detroit, Michigan to further his artistic studies.  He has been working as an artist ever since.  In addition to creating art, Mr. Stephan also enjoys spreading his love of art to others by teaching it.

If you would like to see more examples of Mr. Stephan’s work, feel free to visit his website at https://www.lamassuart.com/.  A large percentage of his art reflects his love for his Assyrian heritage.  In addition to the Assyrian Cultural Foundation in Chicago, you can also see his artwork displayed throughout Ishtar Restaurant in Sterling Heights, Michigan.

If you would like to hear Mr. Stephan in his own words, the Assyrian Podcast has a great interview with him.