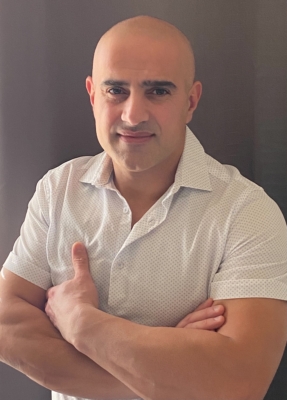 Did you know that Maher Minyanish, the third-place winner of ACF’s recent 2020 Art Competition, was also featured on Chicago’s ABC television station in 2017?  After Ryan Chiaverini, a co-host of a Chicago talk show program called Windy City Live, received a painting done by Minyanish, he was impressed and wanted people to learn more about him, so invited Minyanish on his show.

Minyanish was born to an Assyrian family in Nineveh, Iraq, but fled the country with his family in 1994.  His parents left because they wanted their family to have a better life and future, which was no longer possible in Iraq.  Because of their refugee status, Minyanish and his family had to stay in the country of Jordan for fifteen years until the United States finally accepted their immigration application.

Ever since he was a young boy, Minyanish enjoyed creating and drawing.  Although life as a refugee in Jordan was not easy and prevented him from formally pursuing an education in art, Minyanish never stopped drawing whenever he had a chance.  His perseverance and talent allowed him to eventually start a career as an artist at the age of 21.  Prior to arriving in the United States in 2009, Minyanish worked as an artist in a mall in Amman, Jordan.  Despite not knowing any English when he arrived in the United States, Minyanish never gave up, and now works as an artist in California.

Minyanish has been submitting his artwork to ACF’s art competitions since the first one in 2017 and has won a prize almost every year.  Because he does a lot of commissioned work for people, he has an exceptional talent for painting people’s portraits.  However, as his submission for ACF’s 2020 Art Competition can attest, his talent is not limited to portraits.  Every piece of artwork that Minyanish has submitted to our competitions has included a lot of detail and symbolism.

Minyanish finds inspiration in the fact that he descends from a creative people, and one of the first civilizations in history.  He encourages other Assyrian artists to also be proud of their Assyrian identity, and never stop practicing their skills.  Although he has experienced many hardships in his life, Minyanish believes that he has been able to succeed because he has put God first and never stopped chasing his dreams.