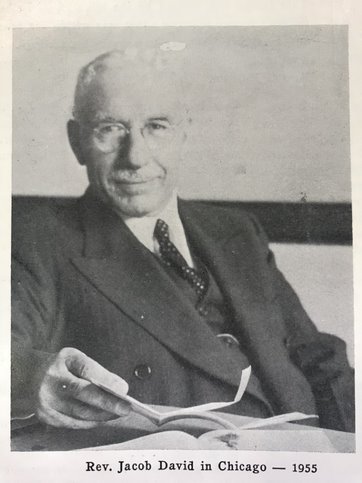 Did you know that Assyrians were attending universities in the United States as early as the nineteenth century?  Rev. Jacob David was one of those individuals.  He came to the United States in 1893 to attend the Ivy League school, Brown University, in Providence, Rhode Island.  After graduating in 1899, he continued his education at Newton Theological Seminary in Newton Massachusetts (now part of Yale University), where he received his pastoral ordination.

While in Tabriz, Rev. David superintended the Near East Relief Orphanage that cared for Assyrian children whose parents had perished during the Genocide.  He also superintended a refugee school there, and worked with his wife, Judith Moorhatch, to comfort many Genocide survivors.  In 1921, he and his family moved to the United States.  However, Rev. David continued to assist his people by serving as a national speaker for an American organization called Near East Relief, which aided Assyrian and Armenian refugees of the Genocide.  His speaking engagements helped bring awareness of the Genocide to Americans.

Rev. Jacob David served as a missionary in Chicago for the remainder of his life.  He and his wife had four children.  Rev. David passed away in 1967 and is buried at Elmwood Cemetery, near Chicago.