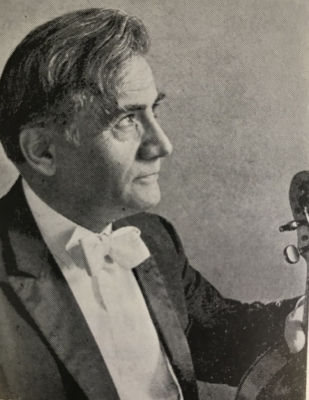 Did you know that Stephan Karam, an Assyrian-Armenian violinist, self-published his own LP record in 1970, and advertised about it in the July/August issue of The Assyrian Star magazine?  In the record, Karam performed pieces by Johann Sebastian Bach, Giuseppe Tartini, and several other composers.  He also performed his own composition called “Adagio from Sonata in C for Violin & Piano.”  Unfortunately, it appears difficult to find any of Karam’s recordings online.  Sadly, only one library has a copy of his LP record, and that is at Western Illinois University’s Malpass Library in Macomb, Illinois (located 4 hours southwest of Chicago).

Stephan Karam was born to an Armenian mother named Tigrenoui Massehian, and an Assyrian father named Mesrop Khan Karam.  Mesrop Karam was born in Urmia, Iran, received an education at the missionary schools there, learned ten languages, and became the Secretary of Literature and Languages at the court of the Qajar Dynasty in Tabriz.  Mesrop also translated Omar Khayyam’s Rubaiyat from Persian into Assyrian.

Mesrop’s youngest child, Stephan, was born in Tabriz, Persia (now Iran) in 1908.  He became interested in the violin at the young age of six, when he saw a violin in a store window and asked his father for it.  Initially, Stephan Karam taught himself the violin.  He would travel to different villages on donkeys with his friends to perform music for others.  However, Karam’s father eventually sent him to the Conservatoire de Paris in 1925, where he studied the violin more professionally.  Following his time in France, he attended the Brussels Royal Conservatory in Belgium.  Oddly, Karam moved to Berlin, Germany during World War II, and performed violin on the radio there.  That is where he met his German wife, Irmgard Feldhahn.  After the war, Karam studied in Austria under Paul Hindemith and Johann Nepomuk David.

Because Europe was still recovering from WWII, Karam decided to move to the United States in 1954.  Unfortunately, Karam struggled to find classical musician positions throughout his entire career, and often relied on the more stable income of his wife’s secretarial positions.  Karam frequently moved his family around the United States in search of better jobs.  The St. Louis Symphony Orchestra, the Tulsa Symphony Orchestra, and the Denver Symphony Orchestra were a few of the many orchestras that employed him.  He also taught music at several colleges throughout the years.

In 1961, the Assyrian American Federation organized a violin recital for Karam at Northwestern University in Evanston, Illinois.  An Assyrian musician named Nell Warda accompanied him on the piano.  As mentioned earlier, Karam self-published his own LP record in 1970.  He was able to advertise for it in The Assyrian Star, because his cousin, Malcolm Karam, was the editor of the magazine at the time.  Perhaps Karam’s greatest composition was Symphonie Iranienne, a work he composed in 1950.  The piece includes a fusion of Western and Eastern elements, most likely inspired by both his classical training and the music of his native country of Iran.  Karam planned to perform the piece at the Roudaki Hall in Tehran in 1974, but, unfortunately, passed away before he could.

“Ionia Records Is Pleased to Announce the Release of a High Fidelity Record by Stephen Karam, Violinist-Composer.” The Assyrian Star, July/August 1970.

Karam-Read, Daisy. “A Biography of Stephan Karam.” Encountering the Other. https://encounteringtheother.wordpress.com/a-brief-biography-of-stephan-karam/ (accessed February 19, 2021).