In 2020, the Ashurbanipal Library received a large donation from the collection of the late Assyrian publisher, Youel Abraham Baaba.  The donation arrived from England and included many amazing books.  One of them happened to be associated with two British knights! 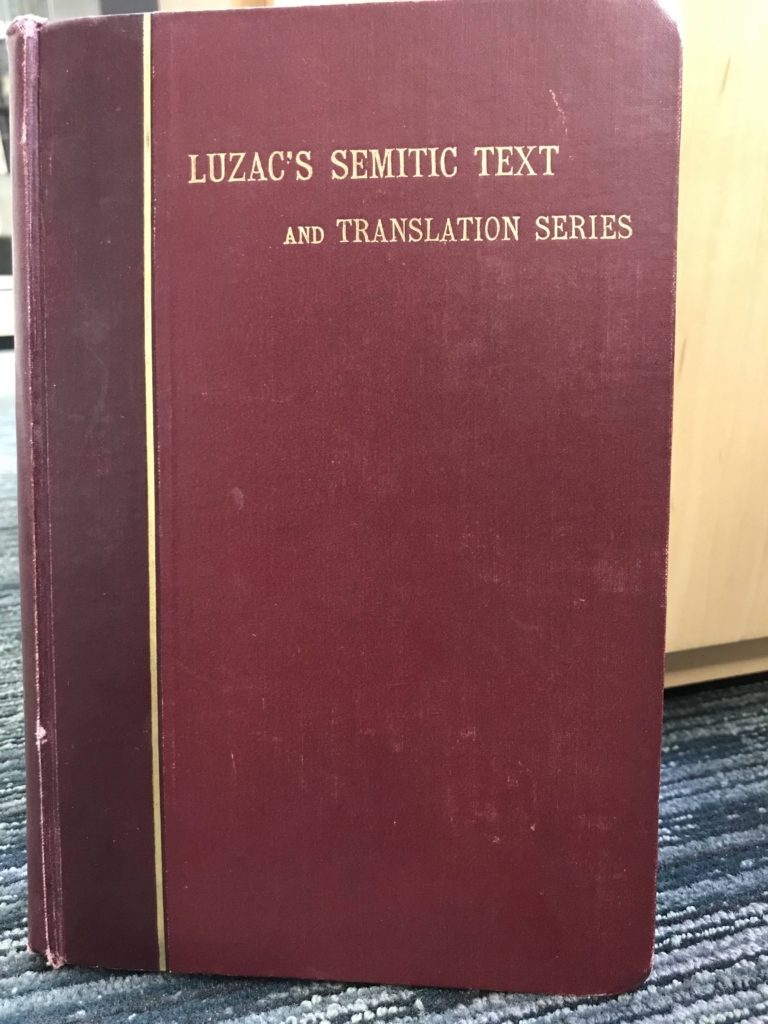 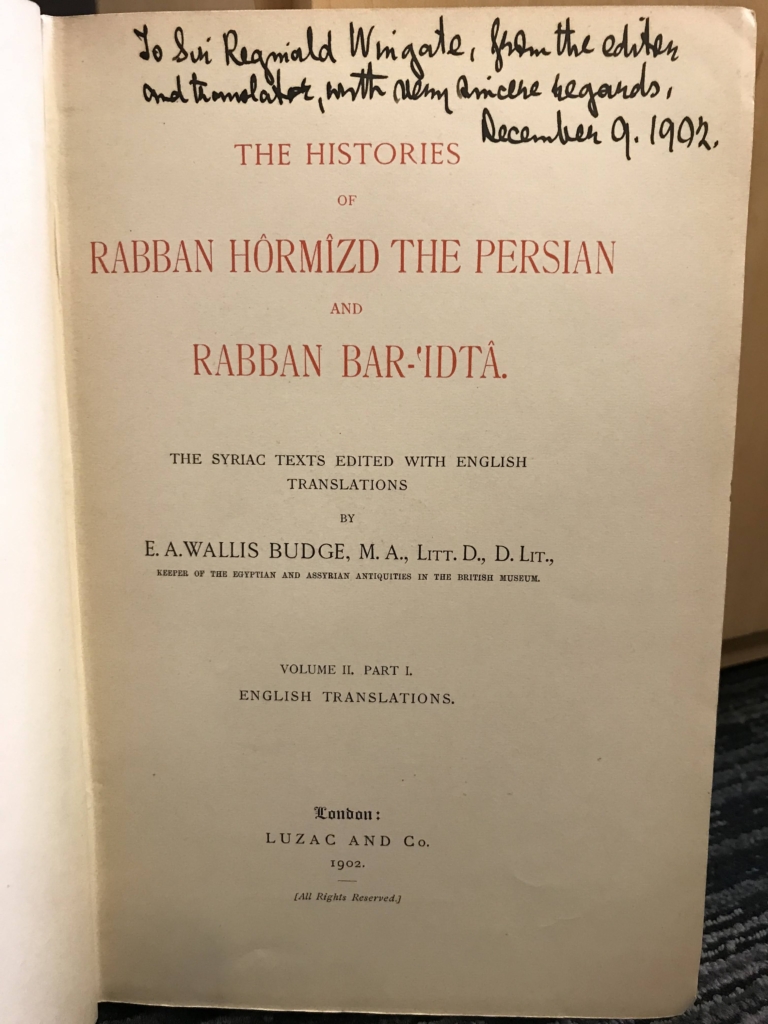 This book is volume 2, part 1 of a work originally written by two monks of the Church of the East who lived in northern Iraq in the 7th century A.D.  Sir Ernest Alfred Thompson Wallis Budge edited and republished this work, along with an English translation of it, in 1902.  Budge was a curator of the ancient Assyrian and Egyptian antiquities of the British Museum in London from 1894 to 1924, which would have been during the time that this book was published.  He allegedly wrote the inscription on this copy’s title page which says:

To Sir Reginald Wingate, from the editor and translator, with many sincere regards.

Of course, after reading this inscription, I had to search and see who Sir Reginald Wingate was.  I learned that he served as the governor-general of Egypt and Sudan from 1899 to 1916, when both regions were under British control.  Sir Wallis Budge must have met him when he went on his many archaeological digs to Egypt and Sudan.  Note that both Budge and Wingate have the title “Sir,” meaning that they were both knighted.  However, Sir Budge was not knighted until after the publication of this book, in 1920, while Sir Wingate received his knighthood in 1900. 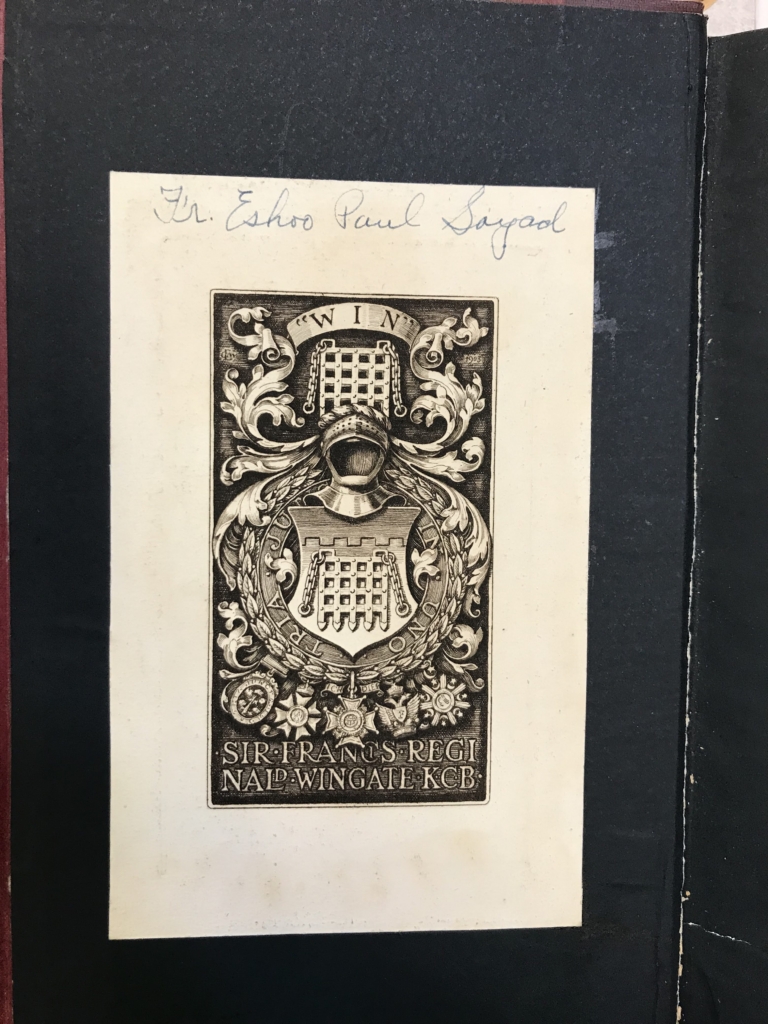 After looking more carefully at this book, I noticed that Sir Wingate had inserted a personal bookplate inside of it.  I also noted the name “Fr. Eshoo Paul Sayad” handwritten above it.  This latter name, which is clearly a modern Assyrian name, must have belonged to a later owner of the book.  Fr. Eshoo Paul Sayad must be one of the links in the chain as to how this book eventually landed in Chicago.  I am not sure if Youel Baaba owned the book after him, or if there were more owners in between their ownerships. 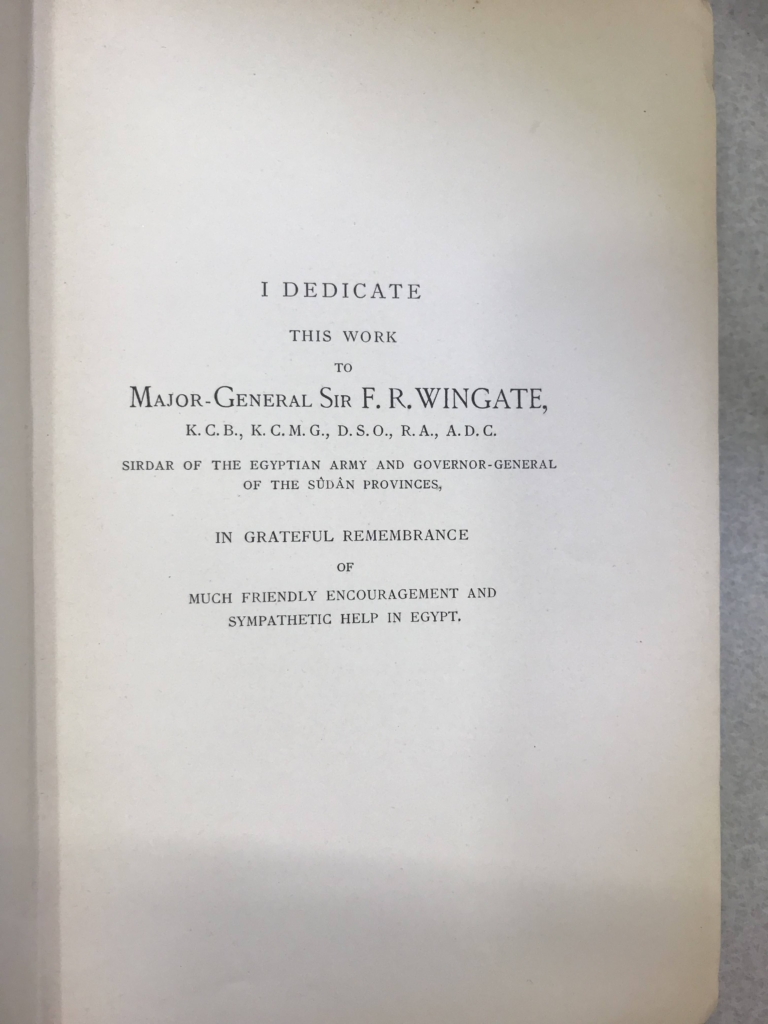 One final observation that I made regarding this book is its dedication page.  Not only did Sir Budge handwrite a dedication to Sir Wingate, but he officially published a dedication to him in volume 2, part 1 of The Histories of Rabban Hormizd the Persian and Rabban Bar-‘Idta.

Hormizd and Bar-‘Idta. The Histories of Rabban Hormizd the Persian and Rabban Bar-‘Idta. Edited by E. A. Wallis Budge. London: Luzac and Co., 1902.