Perhaps you may remember that we posted about the Assyrian football player and coach, Alex Agase, back in June? We are excited to announce that since then, we have discovered several documents donated by Agase’s family in our storage. 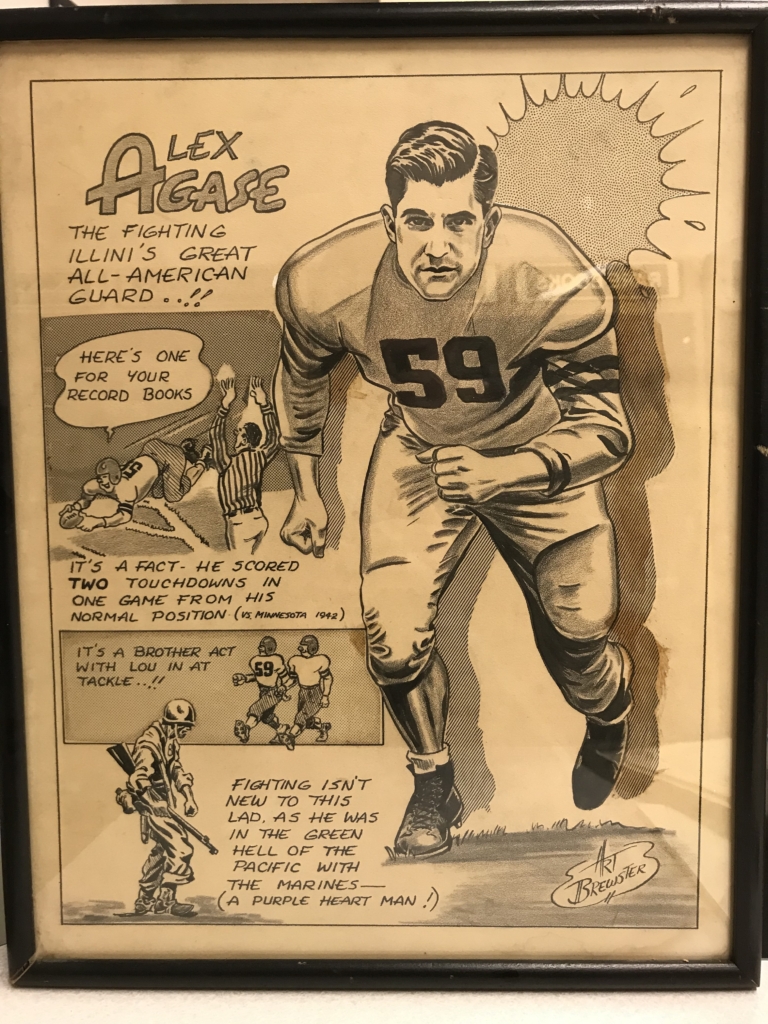 This cartoon that we found mentions how Alex Agase was a Guard with the “Fighting Illini.” Since the “Fighting Illini” is what the sports teams of the University of Illinois in Urbana-Champaign are called, we know that this poster was created while he was still playing football for that University. From the cartoon’s reference to Agase’s Purple Heart, we can further determine that this poster was created after he rejoined the team following World War II, rather than when he was on the team prior to the War. Therefore, it dates to approximately 1946. Additionally, note that the poster references Alex Agase’s brother, Lou, who also played on the University of Illinois’ football team.

Item # 2: Certificate from the Illinois Senate 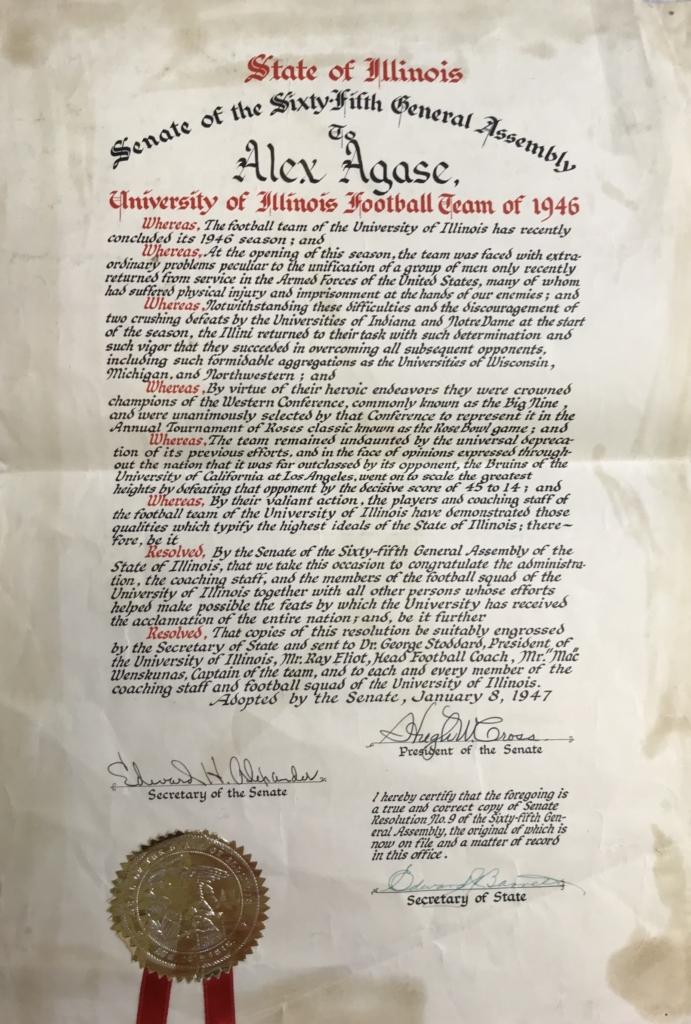 This certificate was awarded to Alex Agase in early 1947 by the Senate of the State of Illinois. In summation, the certificate states its desire to honor the University of Illinois’ 1946 football team, since the team won the Rose Bowl on January 1, 1947. The certificate specifically mentions how the University of Illinois’ football team was especially impressive that year, not only because of its victory, but also because most of its team members were WWII veterans who had only recently returned home from overseas. Not only did Alex Agase receive this certificate from the Illinois Senate, but so did each of his teammates and coaches that year. 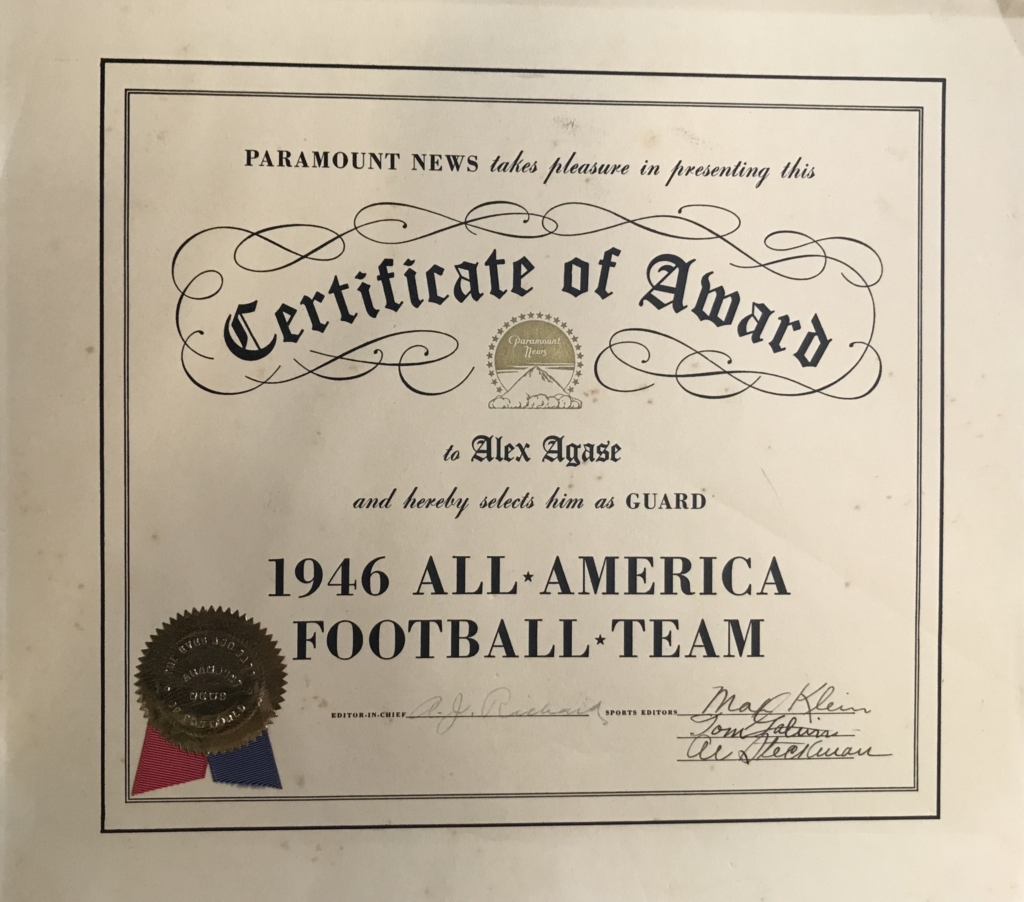 Throughout the twentieth century, various news outlets selected different football players and football teams as the best players or teams of the year, subsequently giving them the title “All America.” In 1946, Paramount News awarded Alex Agase this “All America” certificate. 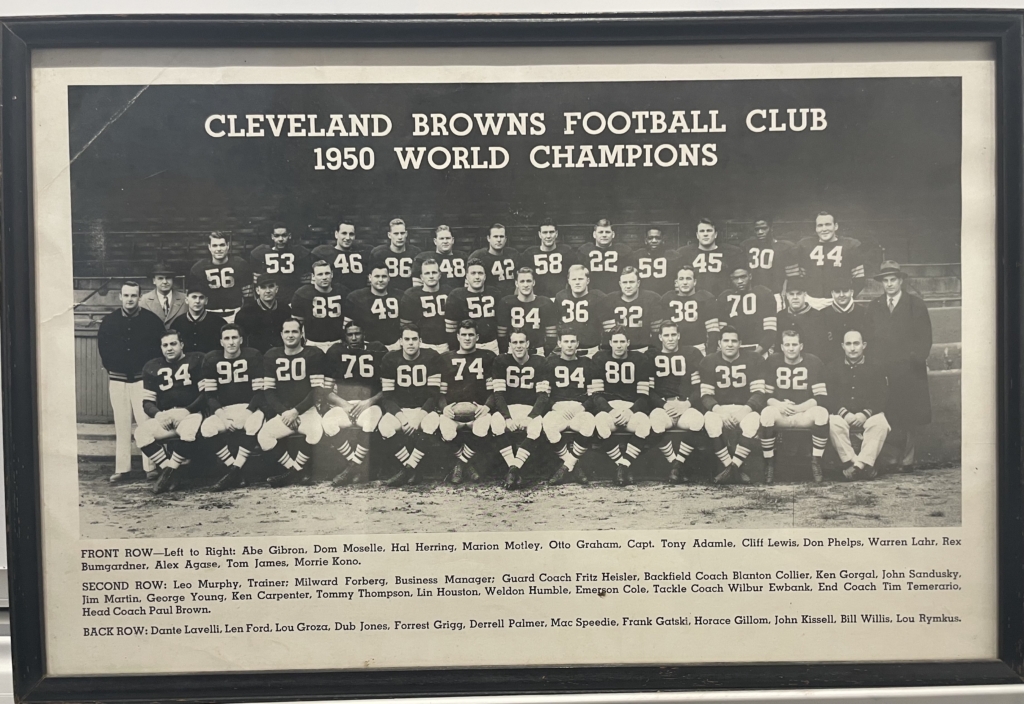 In 1948, Alex Agase joined Ohio’s Cleveland Browns NFL football team. Two years later, while Agase was still on the team, the Cleveland Browns defeated the Los Angeles Rams, winning the 1950 NFL Championship. This photograph is of the winning team. Agase is in the front row, third from the right.

Did you know that two Assyrian brothers worked as American football coaches in the mid-20th century?

Their parents, Goolaziz (who also went by Charles) and Eslie, moved to the United States from Urmia, Iran in 1920.  Among their five children were Alexander Agase (seen on the left), born in 1922, and Louis Agase, (seen on the right) born in 1924.  The two boys were born and raised in the Chicago suburb of Evanston, Illinois.  When they reached the age to attend college, they both went to the University of Illinois in Urbana-Champaign, and accelerated in sports there.

During WWII, the U.S. Marines sent Alex to the Pacific.  He fought at both the Battle of Iwo Jim and the Battle of Okinawa, received injuries, and was awarded a Purple Heart and a Bronze Star.  After the War, he returned to the University of Illinois and graduated with a Bachelor of Science degree in Physical Education in 1947.  That same year, he also helped the University of Illinois’ football team win the 1947 Rose Bowl.  Alex’s younger brother, Lou, participated in the 1947 Rose Bowl as well.  Alex Agase was inducted into the College Football Hall of Fame in 1963.

After playing professional football for a while, Agase worked as a football coach at several universities, including as an assistant coach to Ara Parseghian, the Armenian head coach at Northwestern University.  Agase’s career took a positive turn when he became the new head coach at Northwestern, after Parseghian moved on to coach at Notre Dame University.  In 1970, Agase’s team did so well that the Football Writers Association of America voted him the national coach of the year.  Agase eventually served as Purdue University’s head football coach from 1973 to 1976.  Alex Agase passed away at the age of 85 in 2007.

Alex’s younger brother, Louis, or Lou, also pursued a career in sports.  Like his brother, he received a Bachelor of Science degree in Physical Education from the University of Illinois.  However, unlike Alex, he did not just play football in college.  He also was also a heavyweight wrestler and runner on the track team.  After graduation, Lou briefly coached several sports at a high school, and then coached Junior Varsity football at the University of Illinois.  He later helped coach Michigan State University’s football team before becoming the head coach of the Toronto Argonauts in the 1960s.  The Toronto Argonauts are a professional Canadian football team.  Lou Agase passed away in 2006, a year before Alex.