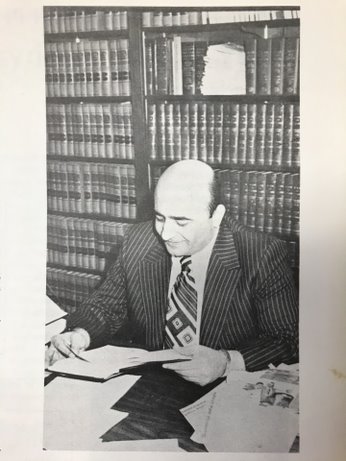 Adam Benjamin, Jr. was the first Assyrian to serve in the United States House of Representatives.  Today, a Veterans’ Outpatient Clinic in Crown Point, Indiana; a metro station in Gary, Indiana; and a memorial highway in Lake County, Indiana are all named after him.  The fact that so many places are named after him, even though he died prematurely at the age of 47, attests to the fact that most people held a high regard for him.

During the Korean War, Benjamin joined the U.S. Marine Corps.  After his honorable discharge from the military in 1954, he attended the United States Military Academy at West Point in 1954.  He ultimately received a Bachelor of Science degree in Engineering, but also furthered his military career for a few years after graduation.  Benjamin was known to overwork, which can be attested by the fact that his many accomplishments included teaching high school physics and mathematics; working as a computer analyst; obtaining a Juris Doctor degree in Law from Valparaiso University; working for the city of Gary, Indiana; and almost obtaining a Master’s degree in Comparative and International Law from Georgetown University before his untimely death.

Benjamin began his career in Indiana politics in the 1960s.  From 1967 to 1971, he served in the Indiana House of Representatives, and then served in the Indiana Senate from 1971 to 1976.  Finally, from 1977 until his death in September of 1982, he served as an Indiana Congressman in the U.S. House of Representatives.  Since Adam Benjamin, Jr. was the first Assyrian to serve in a significant political position in the United States, he helped pave the way for future Assyrian politicians such as Senator John Nimrod and U.S. Congresswoman, Anna Eshoo.