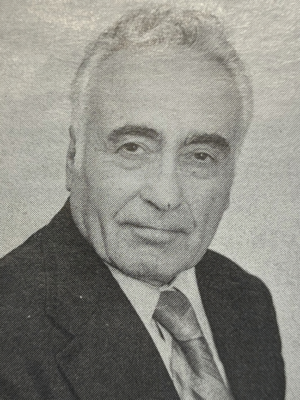 Joseph David George, a distinguished Assyrian engineer, was born in Urmia and is the eldest son of David Shalloo George and Khatoon Sayad George. He attended school in Baghdad where he learned how to read and write in Assyrian. In 1924, he immigrated to Canada with his family and started school in North Battleford, Saskatchewan where he excelled. At North Battleford Collegiate Institute, he won four gold medals for highest class standing and won a scholarship to attend the University of Saskatchewan. During his time in college, he decided to pursue a career in civil engineering and after four years he graduated with distinction.

Shortly after finishing college, he was called to serve during World War II with the Royal Canadian Air Force as a resident engineer. After the war, he held many different engineering positions with his most notable being the Chief of Research and Development for the Metropolitan Roads Department. He held this position until his official retirement in March 1978.

Joseph was also an acclaimed inventor. He invented construction techniques and systems for municipal roads, lighting, and urban planning. One of his most famous innovations was the replacement of steel with aluminum in guardrails and lighting poles on streets and highways. This not only reduced maintenance costs but also improved the safety of citizens. The idea was that if a car struck the guardrail or light post, the material, is made of aluminum and not steel, would sheer off and break and not cause fatal injuries to the people involved. Another invention that Joseph is known for is his patented bridge expansion joint seal being sold by Good Year Tire in Canada and the United States.

Not only was Joseph a keen inventor and engineer, but he was also a writer. He wrote many papers and articles on better street lighting and reclaimed rubber on asphalt roads. He has also published a book on widening roadways to alleviate congestion and traffic.

Joseph David George was indeed a remarkable individual who lived a successful and fulfilling life. He accomplished many different feats during his lifetime and was proud to be an Assyrian. We should all strive for the same excellence as Joseph.