The first of April marks Akitu—the Assyrian New Year, commonly referred to as Kha b’Nissan. It is the most important Assyrian national holiday, and its celebration is one of the many links between ancient and modern Assyrians.

Kha b’Nissan was not only the first day of the new year, but it also marked the start of Spring. During this time, trees and flowers would begin to bloom again. As such, the holiday was a symbol of revival—a major theme in ancient Assyrian mythology. Many Assyrians viewed this day each year as the “start of a new life.”

In ancient times, the Akitu festival was celebrated for twelve days. According to the ancient calendar, the first of April coincided with the Spring Equinox (March 21). It was only after the Assyrians adopted Christianity and embraced the Gregorian Calendar that the date was moved.

Assyrian mythology tells of a story where the goddess of love marries the vegetation god. Their unity, which occurred during the Spring Equinox, ensured the renewal of life, blessing the Earth with fertility. This myth was central to the Akitu celebrations.

Ancient tablets excavated from the Assyrian homeland detail Akitu festivities as they were celebrated thousands of years ago. The Akitu holiday was the most important event in Assyria each year. Tens of thousands of people from all over the Assyrian Empire would travel to its capitol city, Nineveh, to partake in the magnificent event led by the Assyrian kingship.

Elaborate processions were one of the main feats of the festival. Another custom was the practice of mass marriages. A large number of marriage ceremonies took place on the same day in many different cities across Assyria. Couples were married in groups at a time, and later the brides would pay a visit to every household in their city where they would receive blessings and gifts. These gifts were then shared among the brides of each group.

Fortune-telling and gambling were also big parts of Akitu celebrations, as were poetry and storytelling.

While many of the ancient traditions have been retired, one that has survived is the tradition of Diqna d’Nissan, meaning “the beard of Spring.” Each year, Assyrian women and girls gather flowers and herbs that are then strung from the roof of their homes. Honor this tradition by attending AUAF’s flower workshop.

Assyrians worldwide celebrate Kha b’Nissan by way of festivals, parades, and parties. In Australia, a festival is held annually, drawing in tens of thousands of Assyrians and non-Assyrians alike. In Chicago, a parade is held in tribute to the processions in Assyria. In Iraq, similar parades have drawn crowds of 30,000 in years past.

This year, Assyrians will mark 6767 years.

Keep up with our Facebook page over the next 12 days to celebrate Akitu with AUAF. 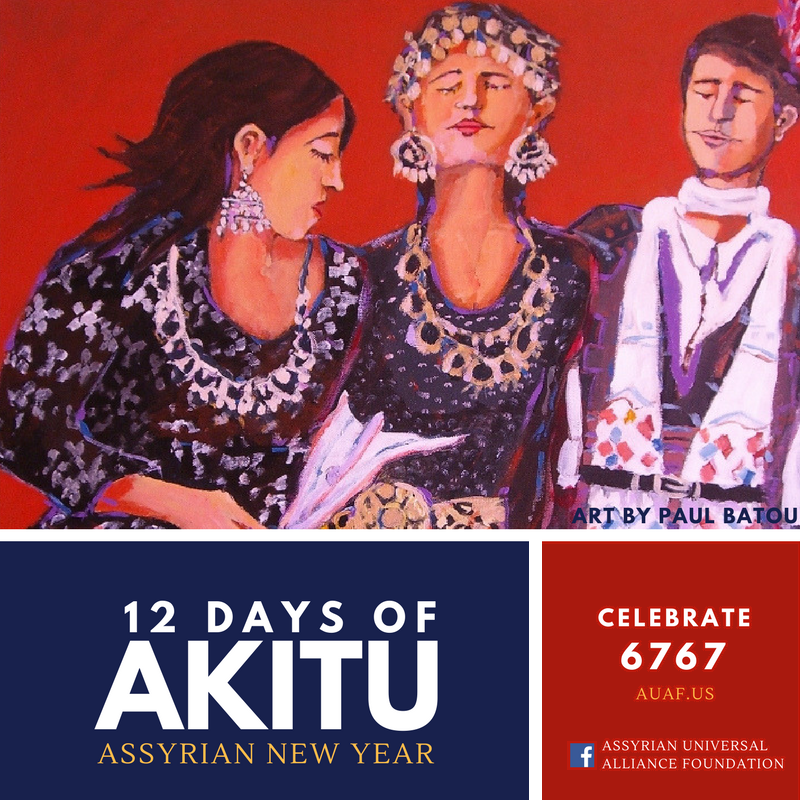