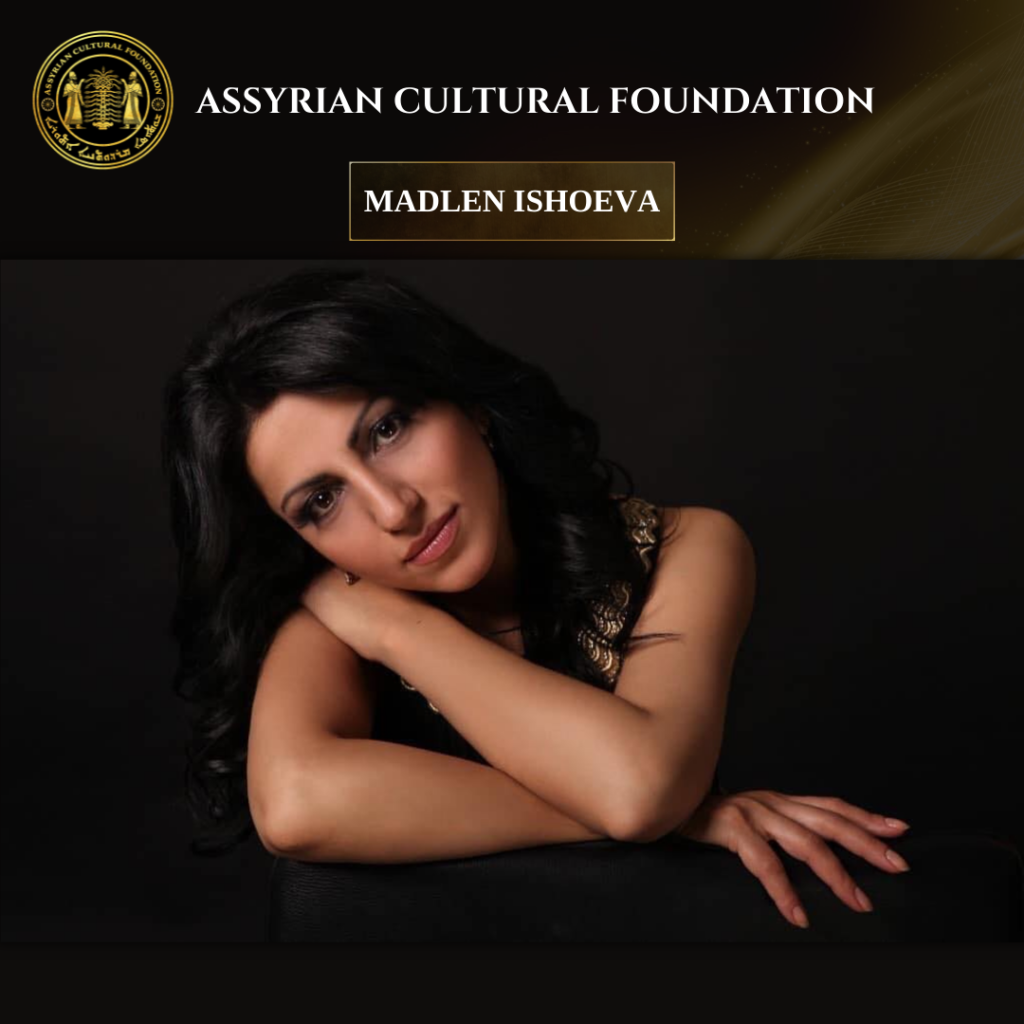 In 2010, Madlen Ishoeva released a music album called “Rodanet Khubi.” The album included some of Ishoeva’s own original songs as well as rearrangements of older Assyrian songs. After its release, Ishoeva’s beautiful voice caught the attention of the Assyrian community worldwide, eventually inspiring the creation of two more albums: “Modeton Mara” in 2011 and “Atouraya” in 2018.

Madlen Ishoeva was born in an Assyrian city in Armenia called Arzni. Her family, originally from Geogtapa, a village in Urmia, Iran, moved to Armenia sometime between 1828-1835, as a result of the Russo-Persian War. As a child, Ishoeva always loved music. She began singing as early as the age of 3, eventually joining her school’s choir and performing in its concerts.

Always dreaming of becoming a singer with her own professional album, Ishoeva first studied piano for five years, and then went to a music college in Oryol, Russia to study vocals. After studying vocals there, she attended a music conservatory in Ukraine. While in Ukraine, she also taught vocals to children for six years at her own music studio. These experiences all helped prepare Ishoeva for a career in singing.

Eventually returning to Russia, Ishoeva made her professional debut in 2010 with the release of her first album. This led to many music tours throughout Russia and, eventually, throughout the world. Different Assyrian artists have contributed to Ishoeva’s subsequent albums, including the Assyrian Cultural Foundation’s very own Ninos Nirari. Ishoeva’s third album was created with the help of Ashoor Baba, but includes a song written by Ninos Nirari called “L’sasane D’wardeh.” Ishoeva is planning to eventually release another song that was written by Ninos Nirari in the future.

For about ten years, Ishoeva has been performing at the Kremlin in Moscow. Initially, she had an Assyrian dance group perform with her, but when the group disbanded, Armenian dancers dressed in Assyrian clothing performed with her for a few years instead. Therefore, in 2018, Ishoeva decided to found a new Assyrian dance group, which became the Ishtar Assyrian Dance Group of Moscow. Ishoeva’s brother, Vasili Ishoeva, became the clothing designer for the group.

The Ishtar Dance Group made its first public appearance in October of 2019 at a festival in Moscow in which it won third place. Then, in April of 2021, it participated in another festival in which it competed against 40 different dance groups and won the prize for best costume and second place for best dance. Although COVID-19 has postponed some of the group’s work recently, it has not stop the Ishtar Dance Group from winning first place in an Assyrian dance competition in Krasnodar, Russia in October of 2021.

Ishoeva has studied and worked hard to get to where she is today, so encourages other Assyrian artists to do the same. She not only continues to perform, produce new albums, and

manage a dance group, but teaches vocals to children as well. One of her top motivations is to make more people aware of who Assyrians are, and to show that they can produce high quality work. The Assyrian Cultural Foundation is proud of Madlen Ishoeva and is excited to see what other work she will produce in the future.