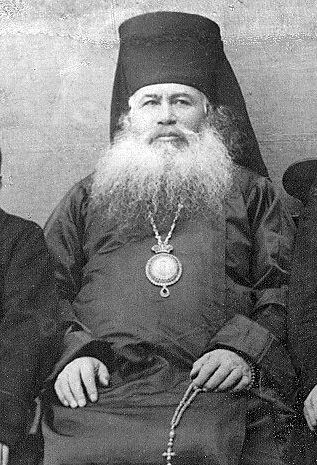 Did you know that in 1915, during the Assyrian Genocide, an Assyrian man who became a bishop in the Russian Orthodox Church, Mar Elia Oraham, hid from Ottoman forces on the roof of the American Mission in Urmia, Iran?  Unfortunately, the Ottoman forces eventually found him, dragged him through the streets, and took him for ransom.  They demanded 10,000 tomans for him, which was an exorbitant price at the time.  Dr. William Ambrose Shedd, a Presbyterian missionary in Urmia, pleaded with the Persian and Ottoman authorities for his release, but to no avail.  Even a group of Muslim citizens from Urmia petitioned for his release, stating that Mar Elia was a righteous man who had always treated them well.  However, their pleas fell to deaf ears.  Nevertheless, the Ottomans did finally release Mar Elia after receiving a payment of 5,000 tomans.

Mar Elia Oraham was born in the village of Armudaghaj in Urmia, Iran sometime between 1853 and 1858 (sources disagree on the date).  His family came from a line of between 12 to 27 bishops (numbers vary depending on the source), with Mar Elia being the final one.  One of Mar Elia’s relatives, Alexander Joseph Oraham, would eventually publish an Assyrian-English dictionary in Chicago in 1943, while his nephew, William Ibrahimi, would become the first Assyrian Representative in Iran’s Parliament in 1963.

From 1894 to 1895, Mar Elia studied at the General Theological Seminary, an Episcopal seminary in New York City.  Mar Elia’s brothers, Shmuel and Daniel, also left Urmia to study in the United States, however, they became medical doctors instead.  After Mar Elia completed his studies in the United States, he continued his education in St. Petersburg, Russia.  In 1899, he even translated a few poems by the renowned Russian poet, Alexander Pushkin, into Assyrian for a Russian book commemorating the centennial of the poet’s birth.  You can read his translation of the poems here: https://babel.hathitrust.org/cgi/pt?id=hvd.32044085523058&view=1up&seq=702&skin=2021

In 1903, Mar Elia returned to Urmia and served as an assistant to Mar Yonan of Sopurghan, the head of the Russian Orthodox Church in the Urmia region at that time.  Mar Elia replaced Mar Yonan in 1911 following the latter’s death.  After World War I began in 1914, and the Russian troops left Iran at the end of that year, the Assyrians of Urmia experienced genocide from both Ottoman and Kurdish groups.  That is why Mar Elia’s life was threatened in 1915, causing him to unsuccessfully hide from the Ottomans on the roof of the American Mission before being caught.

After Mar Elia’s release from the Ottomans, he fled to Moscow where he received the Order of Saint Vladimir, third degree in 1916.  In 1917, he returned to Urmia, and by the end of that year, he, along with two other Assyrian clergymen, traveled to Tbilisi, Georgia to request aid for the devastated Assyrians of Urmia.  The other two clergymen who accompanied him were the Reverend Isaac Malek Yonan, a Presbyterian minister, and Mar Toma Audo, the Chaldean Catholic Archbishop of Urmia and Salamas.  Throughout the remainder of World War I, Mar Elia continued to assist Assyrian refugees to the best of his ability.  Mar Elia passed away in November, 1918 and is buried at Mart Maryam Church in the city of Urmia.