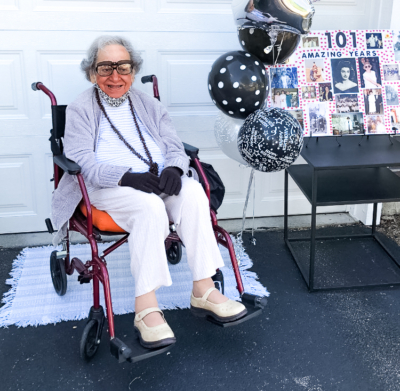 Did you know that in 1995, the Assyrian Cultural Foundation (the Assyrian Universal Alliance Foundation at the time) published an Assyrian cookbook called Assyrian Mothers’ Cookbook: Our Heritage, to raise money for an Assyrian scholarship fund?  The book was so successful that it was published four separate times, with over 1,000 books printed each time.  Norma Sayad George, the former President of the Assyrian Universal Alliance Foundation’s Women’s Board, spearheaded the project.  She is still living in the Chicago area today and is currently 101 years-old!

Norma Sayad was born in Chicago on September 16, 1919 to Assyrian immigrants from Urmia, Iran.  In 1909, her parents, Daniel and Suria Sayad, were the first Assyrian couple to be married in Chicago by the Reverend Haidow Ablahat, whose Assyrian congregation later became known as Carter Memorial Presbyterian Church.  Norma Sayad, herself, married an Assyrian World War II veteran, Albert George, in 1947.  Her wedding photo can be found on page 26 of the 2005 book, Iranians in Chicagoland.

When brainstorming ways to raise money for the AUA Foundation’s Assyrian scholarship fund, Mrs. George believed that a cookbook would be the best way to accomplish this goal.  After working for two years collecting recipes to create Assyrian Mothers’ Cookbook, her hard work paid off.  One amazing aspect of Assyrian Mothers’ Cookbook is that it is not only a recipe book, but also an historical record of who used to live in different Assyrian villages.  That is because the first half of the book contains dedication pages to different family members, and is alphabetically arranged by different Assyrian villages.

Daniel and Suria Sayad’s other children made noteworthy accomplishments in the Assyrian community as well.  For example, their eldest daughter, Sarah Sayad Paz, wrote regularly for The Assyrian Star magazine.  She also wrote two books about Assyrians: Boona: The Little Assyrian Boy, published by AUAF in 1989, and Folk Tales and Stories of the Assyrians, published by AUAF in 1999.  The Sayad’s second son, Sam, created an Assyrian basketball team, which once won a Lincoln Park tournament in Chicago.  Their third daughter, Blanche, created the Assyrian Choral Society, which went on tour to different Assyrian communities throughout the United States.  Finally, although unrelated to Assyrian matters, their youngest son, Danny, was wounded twice during World War II, served in General Patton’s army, and received a delayed Purple Heart seventy years later in 2017.