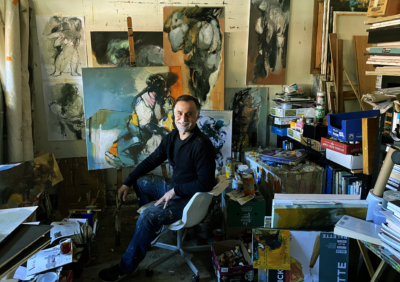 Did you know that in 2006, the talented artist, Qais Al-Sindy, created an art exhibition called Letters Don’t Burn, to bring to the world’s attention the fact that the library of the Academy of Fine Arts in Baghdad was completely burned down in 2003?  After personally witnessing the aftermath of its destruction, Al-Sindy had to tell the story.  He did so by using installations, conceptual art, video art, and painting.  It was one of the largest exhibitions that he has ever done.

Qais Al-Sindy was born to an Assyrian family in Baghdad in 1967.  Even as a young child, he was fascinated with art.  As he grew older, he began experimenting with painting, and started to reproduce famous artwork while in high school.  However, by the time he reached the age to go to college, he decided to pursue a degree in engineering at the University of Baghdad.  His love for art remained, though, so he eventually pursued a second bachelor’s degree, this time in art, and then followed it up with a master’s degree in Fine Arts, which he completed in 2004.  He received both art degrees from Baghdad’s Academy of Fine Arts.

Because of the Iraq War, life for Christians became more dangerous.  Muslim extremists constantly attacked, kidnapped, and threatened Christians, and destroyed their churches and businesses.  This led Al-Sindy to come to the United States in 2008, where he lives today and continues working as an artist.

Describing himself as a “wounded expatriate,” Al-Sindy uses art to tell the stories of his experiences, as well as the experiences of his Assyrian people.  Through art, he can release his burdens while also making the world aware of Iraq’s tragedies.  Al-Sindy’s advice to other Assyrian artists is to “always remember our roots, our civilization, our ancient cultures, and [to] take from this great culture and reflect it in our art.”

Al-Sindy was the second place winner for ACF’s 2020 Fine Arts Competition.  He has also won prizes in our previous art competitions as well.  To learn more about Qais Al-Sindy, and to see some of his other artwork, feel free to visit his website: http://www.qaissindy.com/index.htm.