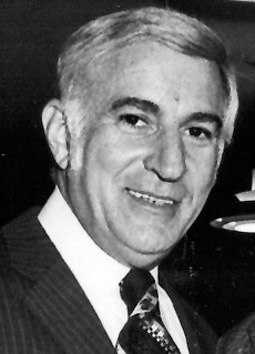 Did you know that one of ACF’s former presidents, John Nimrod, was also the state senator of Illinois from 1973 to 1983?  Nimrod was born in Chicago to an Assyrian family from the village of Seeri in Urmia, Persia (Iran) in 1922.  His father came to Chicago prior to World War I, with the goal of earning enough money to bring the rest of his family over to the United States.  However, once World War I broke out, the lives of Assyrians in Urmia became endangered, so Nimrod’s mother and siblings had to flee Persia as refugees.

During World War II, Nimrod served in the United States Army Air Corps in Europe, and received a Bronze Star for his service.  He later served in the Korean War, where he trained officers, and ultimately left the service as a captain.  According to a Chicago Sun-Times article about Nimrod from January 9, 2009, Nimrod invented a machine that cleaned and cooked rice while he was in Korea, which helped feed the troops more efficiently.

In between the two wars, Nimrod obtained a bachelor’s degree in mechanical and industrial engineering from Northwestern University in Evanston, Illinois, so after his military service, he went into engineering.  However, Nimrod eventually got involved in politics as well, and then became a Republican State Senator for Illinois.  Always a patriotic man, one of his achievements as senator was to sponsor a law that required Illinois elementary and secondary schoolchildren to recite the Pledge of Allegiance every morning.  Nimrod was also a pioneer in promoting the use of solar energy, as well as in helping to create mental health reforms for the state of Illinois.

In addition to being patriotic to the United States, Nimrod had a strong Assyrian identity as well.  He was one of the founding fathers of an international organization called the Unrepresented Nations and Peoples Organization (UNPO).  Founded in 1991, UNPO strives to bring a voice to different ethnicities that tend to be overlooked politically.  Nimrod became a representative for Assyrians at UNPO, and served as one of the organization’s chairmen, as well as a subsequent Honorary President.  In addition to his work with UNPO, Nimrod became the president of the Assyrian Universal Alliance Foundation (ACF today) after its previous president, Helen Nimrod Schwarten, passed away in 1999.  Schwarten was Nimrod’s older sister.  Nimrod, himself, passed away ten years later at the age of 86.