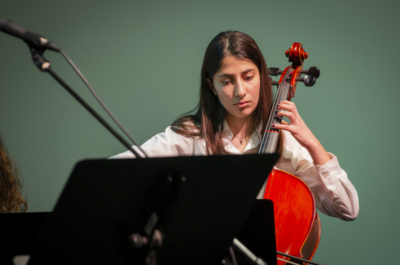 ACF is proud to have Stephanie Sorisho working as a cello instructor for us since the fall of 2019.  What makes Stephanie unique compared to our other music instructors is that she was once an ACF music student herself.  She first began taking cello lessons with us in 2016.  After she graduated from high school in 2019, she still wanted to stay involved with ACF, so became our cello instructor.

Stephanie first started playing the cello ten years ago, when her 4th grade class first introduced her to stringed instruments.  Most of her classmates seemed to be interested in the violin or viola, but she gravitated toward the larger stringed instruments.  Since the bass was too large for her to carry, she ended up choosing the cello instead.  Ever since then, her passion for the cello and music has grown.

Stephanie is currently a sophomore at North Park University in Chicago, where she plays the cello in their orchestra.  One of the reasons why she chose to attend North Park is because their orchestra program is open to non-music majors.  Although Stephanie loves music, she is currently working on getting a Bachelor of Science degree in Molecular Biology and Biotechnology.  After graduation, she hopes to get a PhD or dual MD/PhD in geriatric neurology, which is the study of neurological disorders in the elderly.  Stephanie’s interest in this field arose from her grandfather, who suffered from Alzheimer’s disease at the end of his life.

Stephanie’s grandfather not only inspired her career interests, but also helped her to grow closer to her Assyrian heritage and roots.  Because her parents were often at work, Stephanie’s grandfather helped raise her.  He loved to read, and passed down this love to Stephanie.  Additionally, since Stephanie’s parents came to the United States at a young age, her grandfather was the main one who shared stories with her about Assyrian culture and history back in the Middle East.

Stephanie says that both ACF’s music director, Tiglat Issabey, and lead music instructor, Rasson Betyonan, have been “a good support system” for her.  Both have encouraged her in her musical pursuits, and Mr. Betyonan has provided her with numerous pedagogy tips and tricks.  Stephanie was so appreciative of ACF that while she was still a music student, she used to volunteer her time as an assistant to Mr. Betyonan in his orchestra class.  Now, she not only teaches private cello lessons for ACF, but also assists Stella Sweiss, the assistant director of ACF’s cultural programs, with managing the music, fine arts, and tutoring programs.