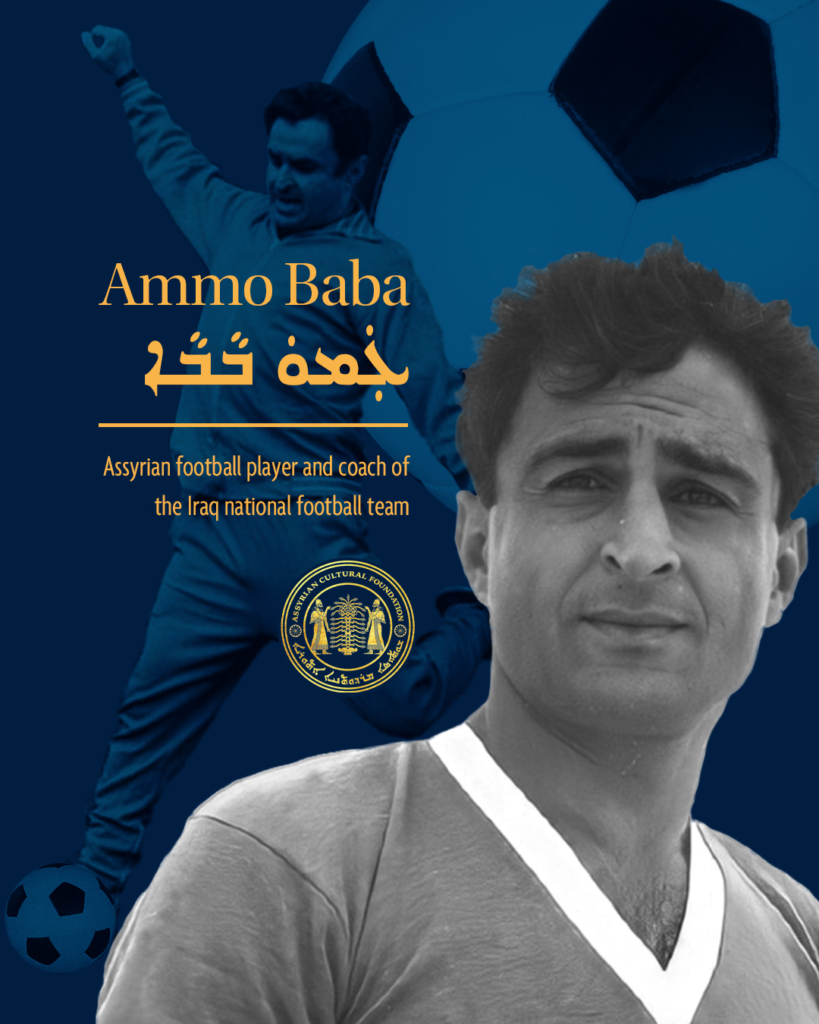 There are few Assyrian soccer players (or footballers, as they’re better known on the other side of the Atlantic ocean) more loved than Emmanuel Baba Dawud, or Ammo Baba.

Born in Baghdad, Iraq in 1934, Baba’s prowess for the sport was made clear at the young age of 16. Iraqi schoolboys’ coach, Ismail Mohammed, discovered Baba while playing for the Liwa Al-Dulaim school province team. He’d come to know the sport by watching British soldiers playing the game, and had an instinctual pull to the game.

With the encouragement of Mohammed, Ammo Baba moved to the Royal Air Force (RAF) Employees’ Club, where he played for four years. His career exploded, however, when he made his senior debut during the International Military Sports Council qualifier in 1955. His career took on an international scope when he scored the team’s first goal against Morocco in 1957.

Upon sustaining an injury in 1958, Iraq’s King Faisal II sent him to London for treatment. During that time, he was scouted by a number of English clubs—including Liverpool, Chelsea, and Celtic. However, Iraq was experiencing new waves of political unrest, and with the safety of his family in mind, he returned home.

After nearly 20 years of playing, Baba’s career ended in 1970, but his career was far from over. Baba coached a number of Iraqi teams, even going as far as to coach three Olympic teams.

Baba’s entire soccer career was colored by the politics of the time. In the 1960s, political parties were starting to worm their way even into sports. He refused to let his face be used for political gain, even when it meant punishment for him. Throughout his entire career, he stood up for his players, as well as his people.

For many Iraqi citizens, Baba was a pure representation of the people. Despite the hardships, his passion for the sport never died. In the later years of his life, he founded a soccer school for underprivileged children—many of whom have grown to be professional soccer players. Following his death in 2009, Al-Rusafa Stadium was renamed to Ammo Baba Stadium in honor of his work.

Babba was a bright spot for a country that desperately needed one. His impression will be felt on the world of soccer for decades to come.